Actually, I’m not even sure I should call it an Alpha.  The folks at Adobe basically hacked together this device to run android so that they can show Air displaying a magazine.  Now.. WHY would someone take a CLEARLY hacked device to a show?  Perhaps because they are so pissed at Apple they were willing to do anything to show Flash running on a tablet?  I would think so. 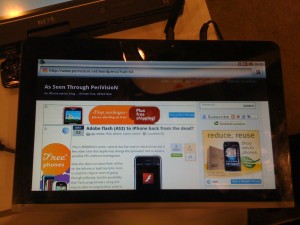 And it was running.  Its was buggy as all get out, but most of the fail was around the digitizer and display.  I pulled up this website and it rendered fine, including the flash ads. So my impressions?  Ignoring the alpha state of it, I can see the value just as I would with the iPad.  Size is everything.  Having a nice large display that I can directly interact with is a big plus.  And since Android is basically the iPhone / iPad open source, I would expect the same trade offs.  More flexibility in exchange for a smoother user experience.

The fun bit was just how hacked this thing was.  Have a look at the images below. I had to press one of the black buttons on the side just to navigate back!!  Same thing for home!!  And actually, that was kinda cool.  The whole makerfaire feel of it. 🙂    Anyway, the takeaway here is, yes Virgina, there IS an Android tablet.  But I think we have a number of months more to wait for its ready. 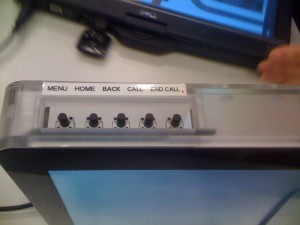 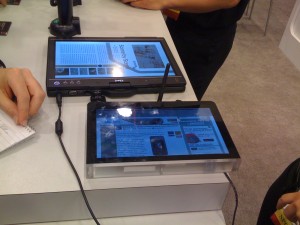