If any of you read my articles for iphonelife magazine, or read this post from awhile back, you know that I said one of big things we have to look forward to are virtual pets we can play with because they will be able to respond the environment around us. 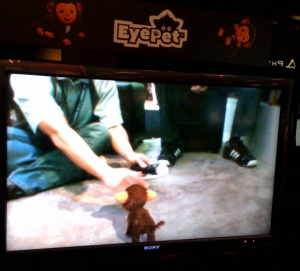 I can imagine an iphone (or any smartphone really) that has virtual pet that lives in the cloud.  You can play with it on the desktop, from the iphone, or using the PlayStation.. just like in the video below!  Yes, we have step one in place.  If they can get this to work on the playstation, it will be able to run on other platforms at some point.  But they key is; it’s the same pet from ANY device.

I filmed this on the iphone at the #GDC 2010 show on my way out so its not well shot.  I will look for a better version at some point and replace it.  But the quality is good enough to get the point across. At first glance, it looks like the algorithm is looking for the fastest moving object and responding to it.  It also seem to favor lighter tones over darker tones. Now how would this work outside, on a bright day, while walking?  I think it actually would hold up pretty well.  If the virtual pet is expected to walk with you for example, the pet would walk say, to your right and just in front, the app can analyze the scene graph and keep track of the scene moving to keep the pet in place, avoiding sharp changes in color, which normally mean a change of surface plane. (to keep everyone from falling asleep I will not go into further detail on how this can work, but lets just say its doable).

I think that with a high rez camera, compass and 1G chip that is starting to become standard on the highend smart phones, we should be able to support a simple version of what we are seeing in the video below.

Can you say Pokemon the next generation?

Now here is the bad news.. They said at the show this is not available in the US and they do not have a release date.  Fail.

Anyway, check out the video below.