Earlier today, I was using Google maps to find a repair shop in Patterson.  As I typed in the address, I got this.. 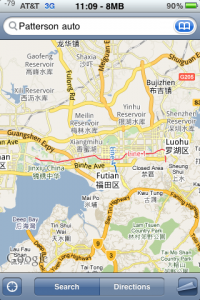 What the heck?  It looks like my search was intercepted and redirected to some Chinese map. I searched again and got no response for about a min. After that minute, Google Maps seemed to be working fine.  So what does this seem to indicate?  Whomever was hacking Google decided to let them know they can make things rough for Google.

Looks like it was the Chinese Govt.  So we can go from someones in China, to China.

“iDefense report unambiguously declares that the Chinese government was, in fact, behind the effort. The report also says that the malicious code was deployed in PDF files that were crafted to exploit a vulnerability in Adobe’s software.”

And just in case you do not already know, Google found they were being hacked by some group in China trying to get to civil rights workers and other ‘people of interest’ to the Chinese. Google, whom have been pretty uneasy about the agreement they have with China to allow their searches to be censored, have finally decided this was enough, and threaded to leave China altogether if they do not lift the censorship and providing a list of all people in China using Google.

Today, I saw the image below on flickr by Grace Kwok from Google.cn (Google in China).  They are already laying down flowers and saying bai bai to Google. More images here..

Further, I just noticed this link at the top right of my GMail account. More Gmail security

So given the most recent hack, and ‘somebodies’ knowing ‘something’ in China, I think we can pretty much call it a day for Google in China. Google’s stock slipped a bit on yesterdays news, but not too bad. However, as the exodus of Google continues, I’m sure the stock price will slip bit by bit as each step of the separation executes.

I’ll try to keep this updated as events unfold. 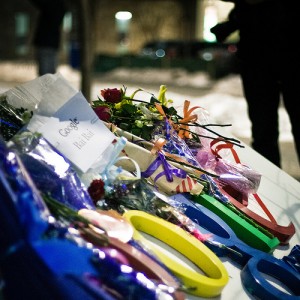