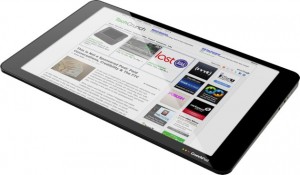 When I called the beginning of the tablet war in Aug, (tablet war postings) I fully expected that we would see 2 early players out the gate, TechCrunches ‘Crunch Pad’ and some sort of Android tablet, to be followed by Apple then MicroSoft. In face, I expected that Arrington would be sitting back with a beer, or glass of wine, and about to drink to the success of creating a dream tablet.  Then I expected a full on war with the two titan, Apple and various Android lines in the final battle with Android winning, Apple second, and 10% market share of MS last.   Well, we already have a first victim.  The CrunchPad is already dead.  At least, “THE CRUNCH PAD”.  It seems from the write up on Gizmodo and TechCrunch, that SOMEHOW, Arrington did not do the proper homework and lost control of the device.  So instead, Fusion Garage and Chandra is going to go it alone. We are only hearing one side, but so far, it sounds VERY slimy of Fusion Garage, Chandra and the investors.

I’m sure we will hear more as time goes on, but I can tell you this, unless the other side of the story has some sort of mirret to it, the ‘CrunchPad’ is dead, even when it comes out under whatever name they give it because, and this is important, people like myself and TONS of other bloggers will be ready to slam this thing as soon as it comes out.