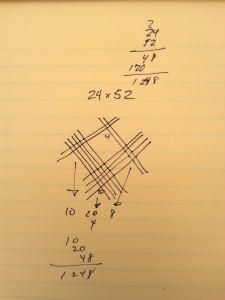 When I first saw this in Reddit I thought it was pretty cool, why it was posted as a Japanese Visual multiplication method I don’t know since there was nothing in the comments saying it was Japanese.  But anyway, the idea is pretty simple.  To multiply two numbers between 11 and 99 you simply draw the corresponding number of lines as a crossing pattern.  I did my own and posted the picture, so lets walk thought it.

Next I do the same thing but in the other direction for 52.

Finally, we total these things up.

Pretty cool eh?  Then to check my work, I did the same thing the way we were all taught in school and totaled it in 10.  I do not know how much time it took me to do this hatching exercise but WAY more then 10 sec.  So for actual use, this is not practical at all, but perhaps as a way to teach what is going on to children when multiplying, perhaps.

Following a link I found a video by Vi Hart explaining this.  As we can see from her video, once you start doing large number, say 88×99, this techniques becomes messy and impractical.  However this got me doing so other searches and seems there are quite a few visualization techniques for multiplying, so check around.