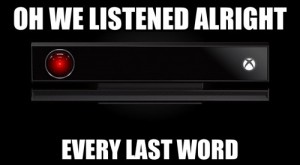 So Microsoft reversed itself.  All along they have been claiming that DRM is the soul of the system, and they reverse it in a few days.  What a joke. Here is the thing, the can turn it back on again anytime they want.  Also, now they claim they had to remove family and other features.  What the heck?  Why cannot it not be optional?

The big changes are as follows:

Except from the press release

So, today I am announcing the following changes to Xbox One and how you can play, share, lend, and resell your games exactly as you do today on Xbox 360. Here is what that means:

An internet connection will not be required to play offline Xbox One games – After a one-time system set-up with a new Xbox One, you can play any disc based game without ever connecting online again. There is no 24 hour connection requirement and you can take your Xbox One anywhere you want and play your games, just like on Xbox 360.

Trade-in, lend, resell, gift, and rent disc based games just like you do today – There will be no limitations to using and sharing games, it will work just as it does today on Xbox 360.

In addition to buying a disc from a retailer, you can also download games from Xbox Live on day of release. If you choose to download your games, you will be able to play them offline just like you do today. Xbox One games will be playable on any Xbox One console — there will be no regional restrictions.