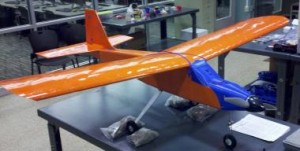 Yup.  A very cool project. A airplane made using 3D printing only. (I’m guessing this is san motor through).  So we have cars, guns, and now a plane.  I would really love to see this released as a kit.  How cool with that be? Download a 3D airplane kit and add motor.  Here is an except from University of Virginia engineering

Three-dimensional printing is, as the name implies, the production or “printing” of actual objects, such as parts for a small airplane, by using a machine that traces out layers of melted plastic in specific shapes until it builds up a piece exactly according to the size and dimensions specified in a computer-aided drawing produced by an engineer.

In this case, the engineers were Easter and Turman, working with insight from their adviser, mechanical and aerospace engineering professor David Sheffler, a U.Va. Engineering School alumnus and 20-year veteran of the aerospace industry.

It was a daunting project – producing a plane with a 6.5-foot wingspan, made from assembled “printed” parts. The students sometimes put in 80-hour workweeks, with many long nights in the lab.

“It was sort of a seat-of-the-pants thing at first – wham, bang,” Easter said. “But we kept banging away and became more confident as we kept designing and printing out new parts.”

Sheffler said he had confidence in them “the entire way.”

The way eventually led to assembly of the plane and four test flights in August and early September at Milton Airfield near Keswick. It achieved a cruising speed of 45 mph and is only the third 3-D printed plane known to have been built and flown.