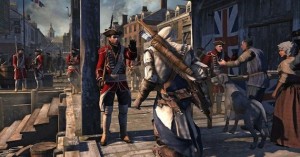 The word has already broke that the next Assassin’s Creed will take place during the American War of Independence. And I have to admit that when I first heard the rumors a few months, back I thought it was going to be a bad idea.  I mean, where are you going to find tall building in post 1776 America in large enough numbers to make this work?  Well, after seeing the leaked screen shots, I though, hmm, this could work. Then today I watched the trailer, now I’m fully convinced.

However, what I’m really waiting to see is just how close they can keep to history?  Oh of course, its a game, so liberties will be required, but just how close can they keep to it? First off, keep in mind that it takes a LONG time to load a musket, so don’t think its going to be guns guns guns.  Second, sure there were lots of big battles, but most of the war was a guerrilla war. And given how the US had WAAY more trees back then, so plenty of places to jump to and from.

As for the story line, of course we do not know the details, but you can tell from the video that Desmond’s decedent is neither on the British or the American side, but clearly seems to be pissed at the Brits for some reason. Also in the video he does not get involved in the larger battles, so my hope is that its more of a challenge to find out which key British officer or operative needs to be taken out, then find an opportunity to take them out. Guess we will know when its comes out.

But for now, check the Vid!