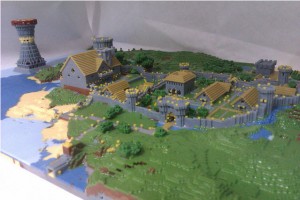 Perfect!  Have a great minecraft property you have lovingly shaped and worked on?  Why not make it a real model using a 3D printer!  Totally!  The WINS of minecraft just continue to pill up.  I remember first playing with it when it first came out thinking, what a cool little indie game. Never would I have thought it would explode to the levels we are seeing now.  And now you can convert your minecraft model to solid 3D.  Sweetness.

Makes sense though.  Based on how the modeling works, it would not only be possible, but quite easy, and something a 3D printer will not no issues with. The open source program is called Mineways.  Its a windows application, but will work on Linux using Win and I would bet on Mac using a Win emulator. Following is a video to show you how it works.

From the site itself..

With the free Mineways program you can interactively select a model from a Minecraft world map and render it, or send it to a 3D printer or 3D printing service such as Shapeways.