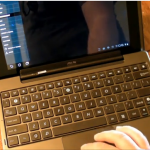 I cannot count how many tablets have come out saying they are better then the ipad this way or that way, all bullocks of course. However, now we have and offering from ASUS that at least appears as a viable competitor.

The ASUS Eee Pad. Strange name I know, but a very straight forward offering. Its a tablet that can convert into a netpad. Sweet. Now waaaaay back in the day, there was another machine that could do this, it was called HP’s TC1100. A Pen based tablet computer that had a removable keyboard. I still have this machine and still love it, and now ASUS has revisited that simple concept for the 21st century.

I have not played with this myself so I cannot attest to how responsive it is. Typically, every tablet I have played with (except the iPad) always had that very slight hesitation when interacting with it. Since the Eee runs Google’s Honeycomb Android OS, and seems to be pretty powerful with its dual core CPU offering, perhaps that will not be the case. But based on some of the
video I have seen, I’m not fully convinced. However, based on the video is the best I’ve seen.

Still, I would consider this since not only do you have a nice simple snap in keyboard, the keyboard also extends the battery life. Nice! The price point is comparable with the iPad as well as feature sets except this guy offers. The $150 keyboard includes two USB ports, an SD card reader, and its own battery.

Ok, so check out the Vid below