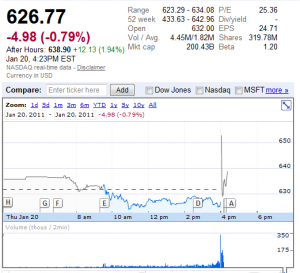 Huh.  Well I did not see this coming..  Larry Page, co-founder of Google is now the CEO and Eric Schmidt will assume the role of Executive Chairman.  Wow.  Not really sure what I think about this.. The stock is down -.79%, but the market is down in general so that does not mean anything.  Perhaps we will not see a market reaction till tomorrow.

Sergey is going to focus on products but he has been doing that all along anyway.  Eric has done a great job growing Google and I like the crazy things that Larry and Sergey have been working on and I kind of like it that way.  Not sure what benefits having Larry as full time CEO is going to provide, but I guess as long as Eric continues to be deeply involved; and Larry listens to him, it may not matter all that much.

Google has also announced plans to streamline decision making and create clearer lines of responsibility and accountability at the top of the company.

Commenting on these changes, Eric said: “We’ve been talking about how best to simplify our management structure and speed up decision making for a long time. By clarifying our individual roles we’ll create clearer responsibility and accountability at the top of the company. In my clear opinion, Larry is ready to lead and I’m excited about working with both him and Sergey for a long time to come.”