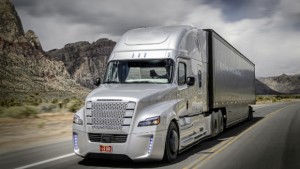 A while back I wrote a post that we would see self driving trucks before we see self driving cars.  Well that truck is now officially hitting the road in Nevada, and assuming the pics are of the actual truck that is going to hit the road, its sci-fi-ish. The Inspiration truck features a system called Highway Pilot which basically lets the driver run hands free once on the highway. The other thing this system will do is let other trucks with the same system to draft each other.  Now its set to 25′ which only gives you a little bit of fuel savings, but once a number of miles and hours have been logged without any problems, then I’m sure they can make that closer and then you will see greater efficiency.

The key things to know about this system is the driver only gets hands free on the highway, and cannot leave his/her seat.  However, there is a tablet like device the driver can use to do other work that is normally done when the rig is not rolling.  I expect LOTS of emails and facebook posts once this system rolls out.  Also, the driver can take over anytime by simply grabbing the wheel or touching one of the pedals.  This is how must cruise controls work so same idea there.

Even though this does not sound like a big deal relative to seeing google cars driving all over Mountain View,  this is a MAJOR event because we can start to officially log miles and hours on a system that is in business use and not testing. So once this rig hits the road the clock starts. 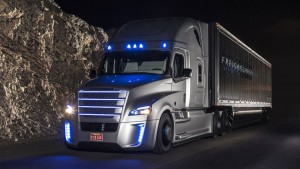 Now there are still concerns, as mentioned in the CNET post, there is going to be some loser who is going to try to cause an accident with the rig so they can sue.  Sigh. But again, this is something we simply have to get through and the sooner we start crossing these bridges the better.  Of course the truck will have cameras everywhere so anything someone tried will be recorded and shown to be there fault, but like I said, someone will try.

I’m excited.  The more rigs that get this system, the more miles and hours logged.  Soon cars will be allowed to have highway cruise as well which will be quality of life saver for anyone who has long commutes.  I used to drive from Mountain View to San Francisco and I WISH we had that when I doing that run.  Anyway, once we get highways on cars, then we can look to the next step, local self driving.