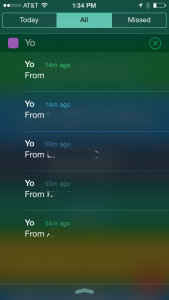 During lunch I was having a conversation with a group of people at work around the app ‘Yo’.  I’m sure you have heard of it by now, basically it is a simple 1 button app that sends the message “Yo” to someone(s) from your address book.  The basic idea came from a request from an executive to design a one button app that can allow him to call someone over without having to type a message.   The app itself was created in 8 hours; and now has 200k+ users and 1 million in funding.  Gezz.  Blake Tidwell then chimed in saying he thinks Yo is the basic unit of communication.  Essentially his point was this.. Many of the social media applications that are out there accomplish a basic task, allow communication to one or more people.  The Yo app is the most primal of these functions.  It allows the sender to communication to the user that they want to say they are still there, or you are on their mind, or if you are still there, or all the above.   That’s it.  Elegant thought, isn’t it though?  Made me think of a heartbeat application many of us employ on occasion just to make sure the service is still alive.  Well this app is somewhat like that but for humans.

Still do not think its worth 1 million.

Now if you excuse me, I’m going to write a ‘waddya want?’ app and collect my cool million.

P.S. If ever there was a theme song for this app, here it is…