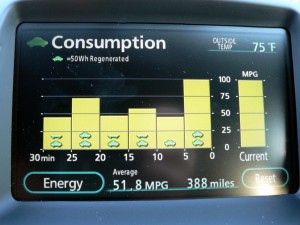 Between living in the US and UK, I have owned a number of different cars, only repeating myself once with a BMW.  I liked each car for different reasons but the two BMW’s I got were first, REALLY great deals, and second, I like the balance of performance, gas mileage and general appearance of the cars. My second BMW, a beautiful ’93 325i was only $3k with another $1k of work put into her.  I got around 24 mpg overall, mostly because I commute with it when I’m not taking the train.

One day I take my wife and her parents on a trip and rented a new Prius.  I was really impressed with how it drove and the fact I got ~64 mpg driving up and down the hills of Yellow Stone with 4 people.  Then I get a new job. This job forced me to drive a bit further in San Francisco and fight more traffic to get there.  So I sell the BMW (for a song) to my nephew and bought a used 06 Prius. It does not drive as nice as the one I rented, but I can deal with it.  Something that I really like about the Prius I rented was playing with the accelerator and brake to get the maximum gas mileage out of it.  It was almost like playing a video game, trying to score the maximum regenerated power when I break, punching the car up to speed then drifting it back down again trying to not engage the gas motor and glide on electric only power. Although I would like more information from the dash monitor, there is still enough real time data to give you feed back on when you get the car in the punch and glide zone. In the beginning I was getting 45 miles per gallon, then 48 mpg, then 50, then on one occasion I got 51…  and then I hit the wall.  No matter what I try, I could not pass that magical 51 mpg per tankful.  But there was another price to be paid for this number. I became of ‘THOSE’ Prius drivers.  You know the type, load as a motor bike, but cant bust a grape in a fruit fight…. Sorry, dont know how Jay Z got in there.  Anyway, I was the type of Prius driver that drives other drivers crazy.  Slow acceleration, driving between 55 and 65 regardless of traffic flow., never keeping a steady speed because of punch and glide, breaking SUPER early to squeeze out every amp of power through regenerative breaking.

Although I noticed how my driving habits changed, and know why they changed, I was still pretty surprised how the gamification of driving changed me so quickly.  I would toggle between the overall trending performance bars and real-time power consumption bars pretty often.  I would obsess on collecting as many 50w green regen badges as I could. Whenever possible I would try to get the battery into the green level then glide the car on electric power only as long as I could.  My wife would laugh as we pull into the last long street before our house and I purposely accelerate as slowly as possible and never go above 29 just to keep it in electric only mode all the way to the house.

Finally, the Old BMW and Motorcycle driver/rider finally broke threw the car gamification haze I was in and ask; “will you DRIVE for &*$(&( sake!?”  A part of me started to get annoyed at myself when I see people passing me because I was not driving he flow of traffic.  Or puzzled looks as I break too soon, or accelerate too slow.  Once I knew I could not really beat 51 under normal circumstances, I purposely turned the displays off, and returned to normal driving. The interesting thing is; I did not drop that far in gas mileage.  Right now I’m doing between 47 and 49 MPG per tank. What I realized is I’m still doing some of the things I used to when I was trying to maximize the gas mileage in the Prius, but only when there are not other cars around.  So if I’m alone on the road or highway, I may punch and glide, pull off a little more slowly then normal and I STILL drag out every amp I can when breaking, but only when there is no one around me.  However, once I’m in traffic, I find myself crusing at the same speeds I used to, accelerating exactly on flow.  I do tend to drag my braking out a little bit, but not enough to through people off.

So a message to all you fellow Prius drivers out there.  You may not realize it, but your annoying.  DRIVE THE FLOW OF TRAFFIC!!