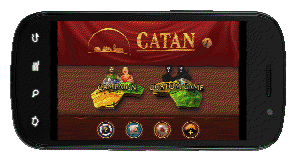 The first AndroidTM version of Klaus Teuber’s famous board game is available now.

Several Catanians will prove themselves worthy opponents: pirate Jean, with her no prisoners attitude; Sean the ruthless knight or Vincent the merchant, who’ll never be short-changed. True to the original game, up to four players can compete for the most settlements, the longest roads and the largest army via hot seat multiplayer mode on their android phones – anytime, anywhere.

A completely new art design, interchangeable tilesets and an optimized UI makes Ca- tan shine in an even brighter light.

The Seafarers expansion* offers a campaign as well as more than ten diverse scenarios, each of them with very different goals. The player can become harbormaster or discover new islands on the even bigger and more varied Catan world. Extra game elements, such as ships, gold fields, treasures, and pirates offer numerous new opportunities.

Check out some of the screenshots…