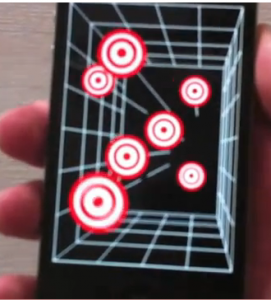 Remember Johnny Chung Lee who did that really cool hack on the Nintendo Wii awhile back?  He created a 3D simulation using head tracking… Video below the post in case you do not remember. Anyway, seems Jeremie Francone and Laurence Nigay from the Engineering Human-Computer Interaction (EHCI) research group at the Grenoble Informatics Laboratory did the same basic 3d hack using the iPhone 4 and iPad 2 front facing camera. Video also provided below the post.

Now the cool things about this is that in theory this will work with any device that you can connect an external camera to.  Although I know of no way to do this, lets say you have the original ipad, perhaps the algorithm will work using the back camera.  basically you are tracking 3 things, normally LEDs or other markers on your head, well. what if they were placed on a table so the rear camera can see it?  In theory that should work.  We’ll see though.  So many devices are coming out with both front and rear that it may not matter.

Check out the video below.  TELL me you do not droll over the possibilities here.

QUICK UPDATE!!  Check this hack out!  This is Rittai Kakushi e Attakoreda, a DSiWare game that makes brilliant use of the Nintendo DSi’s built-in cameras to control an in-game camera that lets the player explore a 3D diorama to find hidden objects.  Ta to Ramine Darabiha for the heads up.

And as promised, the original..